I’m pleased to announce that THE KILLING LAND, a romantic Western suspense thriller is now published by Five Star/Cengage in hardcover as well as ebooks. The novel was years in the making and is my seventh book with Five Star--a lucky number I hope!  A special note of thanks goes to Alice Duncan, my excellent editor at Five Star. 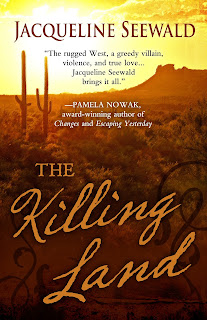 This novel is set principally in the of the early l880's where a courageous settler from the East and an aristocratic cattle baron become involved in a love/hate relationship. The two, although attracted to each other, are initially distrustful and antagonistic toward one another. The dangers they face draw them together.

Mary suspects that is responsible for trying to drive the homesteaders and sheepherders off the land cattlemen consider rightfully theirs. When her uncle is murdered, Mary intends to discover who is responsible and why. In so doing, she becomes a person of interest to a vicious outlaw.

Here’s an excerpt from near the beginning of the book:

“You’re a fool.”
Mary MacGreggor stared up at the ice-blue eyes of the handsome cowman in front of her with surprise bordering on shock. She simply did not believe he could be so rude. Surely, even in the West, people must learn manners? The tall rancher looked from Uncle Isaac to her, shook his head, and then dismounted.
“Am I to understand you won’t do business with me?” Isaac asked in a calm, quiet voice.
“Didn’t say that, Mr. Stafford.” The rancher glanced over at Mary, raking her boldly from head to toe with a single look she found embarrassing. Unconsciously, Mary’s hand went to her head to straighten her bonnet.
“I never discuss business in front of a lady, not even a pretty one.” His tone was arrogant and patronizing. But then, wasn’t that just the way with rich people, thinking and acting as if they were so much better than everyone else?
And there was no doubt this cowboy was rich. Uncle Isaac had explained to her that Cal Davis owned Rancho Royo and the Thunderbolt, both of which were large spreads, and taken together, the biggest cattle ranch in . Cal Davis’s property also included much in the way of forested acreage, which was what interested them.
“Mr. Davis, I should introduce you to my niece, Mary MacGreggor. She is also my partner in the farm, since half of the financial investment is hers. You’ll also find she has a good head for business.”
The rancher looked down at her with what she could only interpret as an amused air of superiority. She felt the blood rising to her face and averted her gaze.
“I was told that you planned to meet me here today to ask about buying some of my lumber,” said in a flat voice.
“That’s right. We intend to build a permanent dwelling, and therefore, it should be the best structure we can afford.”
“Why don’t you join me while I pick up some things in the general store and we’ll talk this over.” Although his voice now sounded polite, his manner was still disdainful.
They followed Cal Davis into a store that bore the sign “Emporium” in the front window. Once inside, Mary looked around, noticing that harnesses hung from the ceiling, along with saddles and bridles. The store seemed to sell a little of everything; big sacks of sugar and flour were piled up in one corner, bolts of calico in another.
Cal Davis walked up to the counter and asked the store owner about checking over some accounts. Then he turned back to them once again. Mary surveyed the man. He seemed just as tall out of the saddle as he had looked in it. He was lean but well-built, with broad, muscular shoulders and narrow hips. The man wore fine black leather boots which extended to his knees. A brown work shirt, jeans, leather vest, and brown Stetson completed his wardrobe. Strapped to his thigh was a holstered revolver that made him look dangerous.
“There’s plenty of good pine and fir trees up in the hills. We’ve been blessed that way. But the fact is, I don’t think you’ll be needin’ it.”
Isaac wrinkled his brow, looking much older than his thirty-seven years. “What makes you say that?”
“Plain truth is the land you’ve claimed ain’t fit for farming.”
“I don’t understand,” Mary said. It was the first time she had spoken and both men looked at her. Mr. Davis, in particular, seemed surprised at having a woman comment during a business discussion.
As he removed his hat in what seemed to be a gesture of deference to her, she could not help but notice how sun-streaked his light brown hair was or how it fell in waves over his long forehead. There were slight creases at the corners of his eyes as if he were accustomed to squinting at the sun.
“ Ma’am, we’ve always used that land for grazing Thunderbolt cattle. It just ain’t fit for anything else.”
“My uncle thinks it could be.”
His mouth smiled, but his eyes were anything but friendly. She met his level gaze directly, looking up into the tanned, weather-beaten face.
* * * * *
Here’s what the first reviewer had to say about the novel:

You can check out THE KILLING LAND at:

and many other booksellers.

You can also put in a request for this novel at your local library.

I am offering a print giveaway of THE KILLING LAND. The ARCs were printed in trade paperback. Please leave an e-mail or web address in the comments section if interested. There will be a random drawing. The winner(s) will be announced here one week from today.

Thanks for dropping by!