Deirdre Wait has been a graphic designer for more than 25 years, and a book cover designer for more than 18. She got her start as a newspaper advertising designer with Community Newspaper Company (CNC) in Massachusetts, eventually becoming a senior designer responsible for some of CNC’s top clients as well as promotional and marketing materials for the company. To expand her design and layout skills, she also worked in the editorial department as a paginator. That job led to a position with Wheeler Publishing—then, a small independent Large Print publisher—as a book paginator. After Wheeler was purchased by Thorndike Publishing in Maine, Thorndike hired Deirdre as a freelance book cover designer, and her main focus has been designing for and promoting books ever since. She and her husband Chris—also a graphic designer—under the business name High Pines Creative have designed covers for Five Star Publishing, Thorndike Press/Wheeler Publishing, and Encircle Publications, as well as ENC Graphic Services, and a number of independent authors. 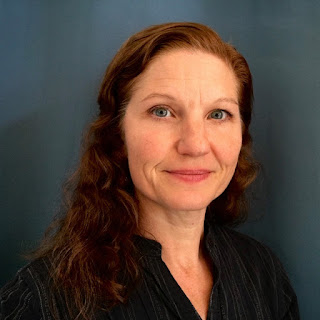 Question: Who or what inspired you to become a cover artist?  Why did you select this particular type of work?

As the saying goes, that’s a long story, but to shorten it, I sort of stumbled into it. I graduated from Stonehill College with a Bachelor’s degree in Marketing, but also one course shy of a second degree in English Literature—I didn’t find a lot that I liked in the classes offered for “Electives” so I filled those credits with English literature classes because I have always loved to read, and never had any problem writing papers. The year I graduated was considered at the time to offer a very tough job market, and I had no idea what I wanted to do with my life at that point, I just knew I wanted to do something creative.

After a couple of random jobs, I got my start as a graphic designer in the newspaper business, designing advertising and marketing material, and eventually working my way up to senior designer. It was there that I met Eddie Vincent. We worked together at the paper for a few years, and then he left the newspaper to take a job with Wheeler Publishing when they were still a tiny outfit in Rockland, MA. He called me at the newspaper one day and asked if I’d be interested in taking a job as a book paginator, and at that point I was ready for a change. So I got the job, really loved it… and six months later Wheeler Publishing was bought by Gale/Thorndike Publishing in Maine. But just when I thought I was losing the first job I ever enjoyed, Thorndike hired Eddie as their production manager to handle the covers for all of their Large Print books as well as their Five Star Publishing line, and Eddie hired my husband Chris and I to design their covers. That was in March of 2002. Since then, I have designed somewhere in the neighborhood of 5,000 book covers, and over the years I have also done work for a number of independent authors, and a few other publishers—most recently, Encircle Publications, Eddie Vincent’s publishing company.

Question:  What kind of books do you prefer working on? Do you have a preference? Why?

I actually don’t have a preference. What I appreciate the most about what I do is the variety. I am the kind of person who can get bored easily if I have to do anything too repetitive, so I enjoy working on every genre. But if I had to choose, I lean towards what I most like to read, and though I also read every genre, my favorite is historical fiction. I enjoy working with setting, designing around a landscape that lures the reader in. I want them to look at the cover and say, “I want to go there.”

Question:  What part does the author of a book play in choosing the artwork?

I love working with authors to come up with cover concepts. However, some authors know exactly what they want, and others don’t even want to be involved in that part. Not all authors are “visual” people and those authors tend to give me the facts and let me “do my thing.” But I do enjoy working with authors who can visualize what they’d like to see on their covers and can give me the kind of “key words,” if you will, to come up with a way to turn their idea into a design.

Question:   Are authors easy or difficult to work with? Do they prove helpful for the most part?

Yes, they definitely prove helpful most of the time. No one knows their stories better, so sometimes it just takes me asking them the right questions to get the information I need to come up with a good concept. The only difficulty comes when I feel an author’s idea won’t necessarily help sell the book, because that’s what we’re doing with the cover—the book cover is the book’s advertisement. Today you’re not just competing with hundreds of thousands of other books, but these days most covers are viewed as thumbnails on a device, so your cover needs to be able to capture someone’s attention when it’s about a quarter of an inch wide. When an author wants an entire scene from the book on the front, I talk them out of it. Like with many things, simple is better.

I work with my husband Chris, also a graphic designer, under the business name High Pines Creative. We still design Large Print covers for Thorndike, and we work with a handful of independent authors on a regular basis. The bulk of our time these days is spent working for Encircle Publications and ENC Graphic Services, the companies of our friend Eddie Vincent. ENC Graphic Services is Eddie’s book design and production company, offering book cover design, interior design and layout for print and ebook, and help for self-publishing authors. We’re basically a virtual production department. Encircle Publications is Eddie and his wife Cynthia’s publishing company. They publish fiction and poetry, and I design covers for them as well as marketing material, and I manage most of their Facebook posts.

Question:   What advice would you offer to those who are currently considering becoming artists in this specialized field?

READ! I think it’s very important to be a reader if you’re going to design book covers, especially anything historical. I will admit early on I made a number of mistakes on historical novels because I didn’t know enough about the particular subject at the time to get it right. In turn, I expanded the scope of my reading so that I could learn more about certain time periods or other new subjects. Those were the early days. Now, I do quite a bit of research for any book that has anything to do with actual events before I even begin to design a cover. The more I read on the subject, the easier it is to design the cover.

As far as skill acquisition, I learned everything I ever needed to know about design problem solving during my newspaper days. It’s like boot camp for graphic designers. They will put you through the wringer, and throw every conceivable crazy idea at you. It won’t always be fun, but if you can stick with it for a reasonable amount of time, you’ll learn almost everything you need to know, and what you don’t know, you’ll learn how to trouble-shoot for yourself.

*****
Deirdre has done a number of my covers for Five Star as well as now for Encircle. My fifth Kim Reynolds mystery BLOOD FAMILY, to be published by Encircle on May 15th, has a Deirdre Wait cover design. 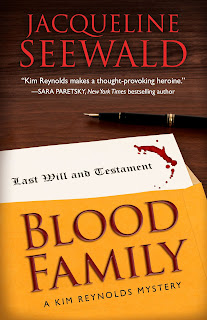 Deirdre is available for questions and comments.

How to Create Fiction That Readers Can’t Put Down 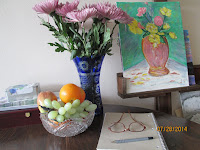 Your comments, observations and input are welcome here!
Posted by Jacqueline Seewald 16 comments:

Writing: Fiction Mistakes and How to Fix Them

I initially wrote a blog for this week entitled “Life and Writing in the Time of Coronavirus.” My husband suggested it. However, when I gave him my article to read, he felt it was too negative. Since we are living in the epicenter of the virus across the GWB from , this may be true. I don’t want to depress my fellow writers. So instead my new blog is about fixing fiction mistakes. 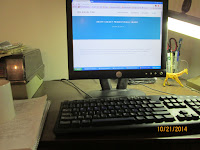 Those of us who write fiction are always looking for ways to improve the quality of our work. I ran across an interesting piece I’ll share with you. According to an article written by James Scott Bell that appeared in a WRITER’S DIGEST newsletter, there are five main fiction writing mistakes that should be avoided. They are as follows:

1.    Presenting perfectly happy, nice characters in the beginning scenes. It’s ’s contention that the reader should be engaged from the first in the plot via trouble, threat, change or challenge to the key character(s). In other words, a strong narrative hook is needed to grip the reader.

2.    “The best novels, the ones that stay with you all the way to the end—and beyond—have the threat of death hanging over every scene.” This goes for romance as well as mystery and suspense. This does not mean necessarily physical death. It can be of a vocational or psychological nature.

3.    Avoid what refers to as “Marshmallow dialogue”. By this he means dialogue that is too gushy or sweet.  Good dialogue is compressed and crisp. Each character has a different and distinctive way of speaking. Also, all dialogue needs to have tension and complexity.

4.    Avoid the dull and predictable. Place something unexpected in each scene keeping the reader turning those pages wanting to know what will happen next.

5.    Dig deep into your characters. Create detailed backstories for them.

My own suggestion is to know more about the characters than you will intend to use in the book itself. I like to create a “character bible” which means writing down all the details about key characters, physical and mental.

I found ’s advice particularly useful for mystery and thriller fiction as well as romantic suspense. What is your opinion?
Posted by Jacqueline Seewald 23 comments: