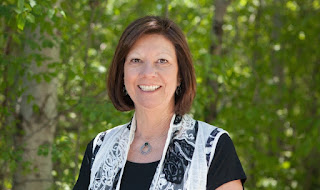 Answer: Skeletons in the Attic is an amateur sleuth mystery, but it is suspenseful rather than cozy. It is the first book in my Marketville Mystery series, and was published by Imajin Books in August 2016. As a reader, my go-to genre is mystery and suspense. I remember reading Learning to Swim and A Cold and Lonely Place by Sara J. Henry and thinking, “I’d like to write a book like that.” 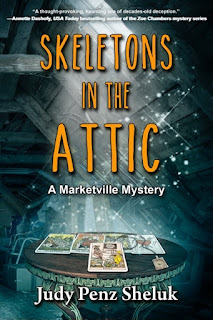 Answer: The idea for Skeletons in the Attic came to me while I waited with my husband, Mike, in our lawyer's office. We were there to update our wills, and his goldendoodle kept us company while our lawyer was detained at court. The opening scenes of this book are culled directly from that experience. Let that be your takeaway from this: everything that happens in a writer's life may end up in one of their stories.

Question:  Could you tell us a little bit about the heroine of your novel?

Answer:  Calamity (Callie) is a thirty-six-year-old single woman with “loser radar” when it comes to men. Her job as a call center worker at a bank’s fraud unit sounds a lot more exciting than it is (all the interesting stuff gets bumped up to her supervisor). When her father dies in an “unfortunate occupational accident,” she inherits a house that she had no idea existed—with the condition that she find out who murdered her mother thirty years before. A mother Callie assumed had left them for “the milkman or some other male equivalent.”

Here’s a Valentine’s Day Treat—sorry not candy or flowers—instead an excerpt from the novel:

Answer:  I’d love to. The Hanged Man’s Noose was my debut novel, published by Barking Rain Press in July 2015. It’s the first book in the Glass Dolphin mystery series. The premise for Noose is this: A greedy real estate developer comes to a small town with plans to build a mega-box store, thereby threatening the livelihoods of the independent merchants on the town’s . This is something we see all the time, in growing communities. I merely took that premise and said, “What if someone was willing to murder over it?” 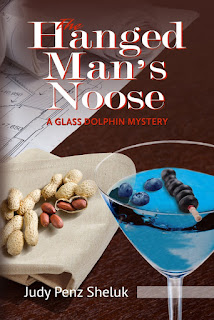 I’ve also written some short crime fiction, which can be found in various anthologies, all available on Amazon. I love writing short fiction, but I find it incredibly challenging. It’s almost easier to write a novel!

Answer: I’ve always wanted to write. As a kid, I wrote stories in my head, on the way to school and back again. I thought all kids did that@ In 2003, I left the corporate world to try life as a freelance writer. I’ve never looked back. In late 2011, after taking some courses in Creative Writing, I decided to start The Hanged Man’s Noose. It was an instant addiction.

Answer: I always answer this question the same way, with a quote from the late, great Agatha Christie. “There was a moment when I changed from an amateur to a professional. I assumed the burden of a profession, which is to write even when you don't want to, don't much like what you're writing, and aren't writing particularly well.”

Answer: Noose is available in print and e-book at all the usual suspects, including B&N, Kobo, Amazon and Kindle. Skeletons, which is print and Kindle only, is also available on Kindle Unlimited.